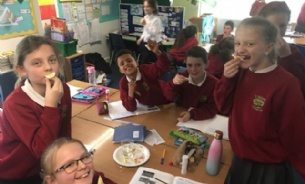 This Week, Year 6 have been learning about 'What it means to be a Jew' in our RE unit on Judaism. The children have thoroughly enjoyed learning about the Jewish Festival- the Passover. They re-enacted the Passover meal, and tasted different elements of the Seder plate, some more readily than others! They were lucky enough to have a visitor from a Rabbi, who turned the classroom into a Synagogue. The children were relieved that they only had to uphold 10 commandments, compared to the 613 that Jews are obliged to. Interestingly, the children learnt that Judaism had close connections with other world religions, including Islam and Christianity. Some even discovered their names were Hebrew.