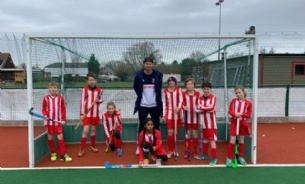 On Thursday 28th February, Louis, Calia, Dylan, Ella,  Neve, James, Michael and I participated in a quicksticks hockey tournament at Surbiton Hockey Club. We won our first match 2-0 and found we had both a strong defence and attack. Then we played a school called Corpus Christy and drew 2-2. That was a thrilling game as we came from 2-0 down. Mrs Ritchie and Mrs Dean were very tense! Soon after we played our final game against Burlington and we beat them 3-1. As a reward for our efforts we shared some biscuits between matches. Only one school in the group qualified and sadly it came to goal differences and Corpus Christy had beaten by 4 goals. What a great day! By Aashny